On March 6, 1943, No. 5 Column split into its fighting groups and made for the small Japanese garrison at Nankan, the gorge and Bonchaung Station’s bridge. Meanwhile, a Burma Rifles (Burrif) party under Captain John Fraser was briefed to recce the planned Irrawaddy crossing point, the ferry town of Tigyaung, around 35 miles distant. 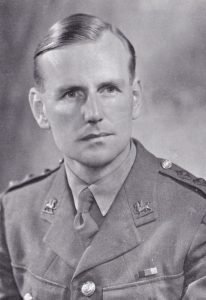 On that morning, as Fergusson moved off, a runner came in reporting that the Nankan group was engaging Japanese in Kyaik-in village. The gorge party then made straight for the gorge and Fergusson decided that his main body should go straight across country to Bonchaung, while the remaining Rifle Platoon was ordered to back up the group fighting in Nyaik-in. There were casualties on both sides, including Platoon Commander John Kerr, who suffered a leg wound. Fergusson decided to take a look. Kerr told him they had run into a Japanese truck parked in the village. They opened up and killed several of the enemy, sustaining two killed and several wounded themselves. The truck then drove off. At that point Kerr’s men had no idea they were still at risk. A new light machine gun opened fire, hitting Kerr and several others. Later, the Column Commander himself had a close shave: “While he was telling me this, there was a sudden report just behind my ear, and I spun round to find Peter Dorans with a smoking rifle, and one of the two ‘dead’ Japs in the road writhing. He had suddenly flung himself upon his elbow and pointed his rifle at me. Peter shot him again and finally dispatched him.”

Now Fergusson faced his greatest horror: “What to do with the wounded?” Five men were unable to move, including Kerr. He and two others were carried by mule into the village. The remaining two could not be moved. Fergusson told Kerr where they were. There were 16 dead Japanese around and more enemy troops could be expected when the truck driver raised the alarm. With the Rifle Platoons now back, Fergusson headed off but had trouble finding the Bonchaung track. After a hard struggle they arrived, and found the Commando Platoon busily preparing the bridge for demolition. “Hasty” charges were already in place, so they could be blown if the Chindits were disturbed before the main charges were ready.

When the bridge was blown the results were impressive: “The flash illuminated the whole hillside. It showed the men standing tense and waiting, the muleteers with a good grip of their mules; and the brown of the path and the green of the trees preternaturally vivid. Then came the bang. The mules plunged and kicked, the hills for miles around rolled the noise of it about

their hollows and flung it to their neighbours … all of us hoped that John Kerr and his little group of abandoned men, whose sacrifice had helped to make it possible, heard it also, and knew that we had accomplished that which we had come so far to do.” Then they heard a second great explosion – the gorge was blown.

On that same day, Major Michael Calvert’s No. 3 Column blew up two large railway bridges (one with a 300 ft span). Calvert called in an air strike against Japanese positions at Wuntho, 10 miles to the south. They then set ambushes and killed many Japanese without loss to themselves. Both No. 3 and No. 5 Columns had mauled the railway.