Major Fergusson’s No. 5 Column group endured what he called a “cheerless march” on April 4. They were making for the Irrawaddy at a point “somewhere between Katha and Shwegu”. Fergusson’s intended track was now a motorable road too dangerous to use in daylight. They waited until nightfall to begin the march. For the most part this road ran along the heights, with thin jungle to each side. This road dropped into the Irrawaddy basin at Ngosin village. About a mile from this village they came upon a stream, filled their water bottles and went into the jungle to make milkless, surgarless tea.

Fergusson wrote in vivid terms about their sufferings, with the low point defined by the ecstatic reaction to their discovery of a few malted milk tablets. “It was on this day that the craving for sugar became really intense; it had been growing for some time, but from now on it became almost tangible. Looking back on one’s mental condition, I think it bordered on madness. Everybody had hallucinations about sugar, differing only according to their background … This craving for sugar was really agony and I cannot convey its intensity. It dimmed even the craving for solid food and that was cruel enough.”

The men tried cooking grass with the appearance of asparagus, but this proved impossible to swallow. There was no sign of that life-saving staple – bamboo shoots.

The group trekked westwards, to the point where relatively open ground was at its narrowest. They descended to the low ground, scrambling across a motor road at the bottom. As noon approached they were in breast-high dry, dusty grass, with occasional clumps of low trees. Weakness forced halts every 20-30 minutes.

Fergusson wrote: “Some of the men were giving me great anxiety; they had to be helped along by their comrades and were frequently fainting. I still insisted that nobody should part with his rifle, or grenades, although that extra ten or twelve pounds was pain and grief.”

He decided that they had no choice but to risk going into villages for food …”the men were in such a pitiful physical condition that they could barely stumble along, let alone fight. Every man was supporting himself on a stick and we looked more like a collection of Damascus beggars than a fighting force. I had already lost three men from no other cause.”

Fergusson had hopes that Kantha village, five miles away, would be unoccupied … “it was now a question of sink or swim – get food, even if it had to be fought for, or die.”

In the late afternoon they approached Kantha and Fergusson called his officers together, rounding on them for being slow on the uptake. Fergusson himself could hardly speak. He was reminded, quietly, that these were merely symptoms of lack of sugar. They were then bitterly disappointed, as Kantha was found abandoned. Apathy ruled in the bivouac that night. Yet, they had touched bottom and their luck was about to change. Every decision Fergusson took from then on was largely instinctive and it always seemed to work out, even when based on “hunches” and lacking in logic.

“To say that these inexplicable promptings were the hand of God would be presumptuous. I can only say that, time and again, from now on, I found myself making up my mind, for no apparent reason, which led us in the right direction.”

As for the welfare of his men, Bernard Fergusson dwelt on the importance of keeping them informed: “I felt … that now, when it was a question simply of getting them out, with no military success at stake, I was commanding them principally for their direct benefit; and it seemed to me that they had a right to know how their interests were being looked after.”

He was also aware that discipline was essential to survival. His men were warned that they would be shot for theft of rations or any offence that could alienate the local population. “I told them that I would pass judgement and carry out sentence myself, so that any illegality would lie at my door only.”

On the morning of April 6 they left Kantha, taking a track which led to a chaung running through paddy. There they came across three water buffalo. The animals were shot, butchered and cooked. “Our hunger was too savage, however, to wait for it to cook and we gnawed raw lumps of flesh with a horrid eagerness, while the blood ran down our beards and congealed on our chins.” They cooked and ate from nine to five, stopping only to catch some sleep. When the novelty of roasted meat waned, they boiled chunks and drank the broth. The stream offered an opportunity to bathe. Fergusson was shocked at the sight: “…they had no chest muscles at all, their arms and legs were strings and spindles, their skin seemed so brittle that the ribs looked like bursting through it, and they had cavities instead of stomachs.”

They continued to cut up and cook and by the evening their packs and pockets were stuffed with roast meat. The new day saw them in fresh heart but progress was soon blocked by an extensive marsh. They went westwards and met a party of boys fishing, who were willing to lead them through the marsh, to Seiktha village and the possibility of food. They arrived in mid-afternoon, the village being only four miles away from the Irrawaddy. They left after an hour, laden with seven days’ rice each, together with slabs of a fudge-like cake. About a mile out they stopped and cooked a feast of rice and meat. They had a guide from Seiktha to take them on to Thabyehla, where they would be introduced to someone who might be able to organise boats.

Their night bivouac for April 7-8 was about three miles from Thabyehla, on a backwater of the Irrawaddy. They would start out at first light, get to within one mile of the village and the guide would then go forward to sort out the boats. They waited long, anxious hours for news of the negotiations. The guide had been given money to smooth the way, which he obviously pocketed as he failed to return. That night Fergusson decided that it would be safest to split his group into three parties, but the following morning sent a representative back to Seiktha for more help. This did not go well – the Japanese had since called and further help was refused. This prompted Fergusson to go ahead and make the split, with around 22 men in each party. Two groups were led by Captain Tommy Roberts and Flight Lieutenant Denny Sharp. 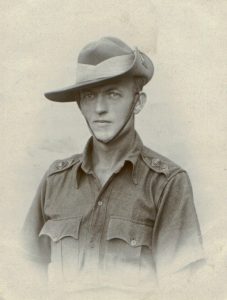 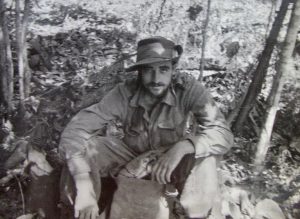 After the split Fergusson’s party (four officers and 20 men) headed north and came upon a colony of fishermen. They promised to ferry them across that night, but they deserted during the afternoon. Fortunately, two teenagers then turned up and were willing to help. The boats leaked badly, but, finally, they made it across.