Bernard Fergusson’s group had now shrunk to just over 20, following division into three dispersal parties for the Irrawaddy crossing. On April 10, with the river behind them, Fergusson’s group entered very thick jungle – their home for the next two days.

By the 13th they reached Kachin territory. Major Fergusson wrote: “We came into that country ragged, sick, weary and wholly unimpressive, and we were received, sheltered, fed and hidden with all the devotion of Highlanders after Culloden.”

They then came across two Kachins who had just been guiding another No. 5 Column dispersal group, led by Denny Sharp. They told them to continue on the present track, as it led to Hpatwat village. “Already we were far up the side of the hills and could see away behind us that revolting river, the Irrawaddy.” They were given lunch and moved on, reaching Shiamdebang village that evening. They slept there that night. In the morning, they looked out across railway valley.

Their next destination was Saga village and another warm reception. Fergusson, by now, had adopted a simple rule of thumb: his aim was to maintain five days’ rice stocks as they marched. The re-supply at Saga was interrupted by news of an approaching Japanese patrol. They decided to get out. The problem with a fight was that they would have to be absolutely certain of killing everyone in that patrol – a single survivor would bring retribution down on the village and also threaten the other dispersal groups. 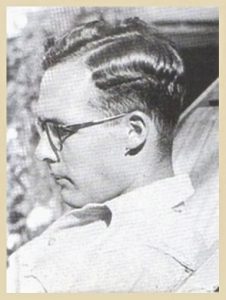 They took shelter in a thick clump of bamboo, until the Japanese patrol left the village. Meanwhile, Fergusson’s party had increased by five with the addition of Lieutenant Bill Edge and two British and two Gurkha soldiers, who had managed to avoid the Japanese.

Fergusson’s group set out for the railway in the late evening, assisted by guides. They entered a village where almost everyone was drunk and received a riotous welcome. They left and began marching along a motor-road, moving parallel to the railway. They took a branch road after several miles and put in a similar distance, then the guides’ confidence, together with Fergusson’s, began to waiver. Soon they found themselves very close to Kadu railway station. They pressed on, keeping clear of the station and the patrolled area. They could just about make out the railway … then they heard a train. When it had passed they crossed the line, found a bivouac and settled for a sleep.

They pushed on at dawn but their guides from Saga then announced that they had reached their limit. Fortunately, their duties were taken over by a passing Kachin volunteer. The young man set a challenging “crow flies” route straight up and down the steep hills and Fergusson was eventually forced to call a special halt. It turned out that the guide had been a Lance-Naik in 3rd Battalion Burma Rifles, who had been wounded in the last campaign and left behind.

On reaching the hill village of Pinmadi, the welcome was unusually cool. They were persuaded to leave and rest in a thick bamboo clump. They received a meal from their reluctant hosts, who had had plenty of contact with the Japanese. Fergusson decided to move on as quickly as possible. The hard-going was making the Major’s hip wound very sore. Their march on April 15, according to Fergusson, was “a shocker”. Their weak condition left them prey to illness. He knew that, if he had to leave anyone behind, they should be left in the safe care of Kachin villagers. The journey continued across the steeply folded country, from one hilltop to the next. They reached Natmauk village, slept well and by the afternoon of the next day, April 16, had reached Kumsai, where they stocked up with rice. They then spent the night at Kaungra, two miles on.

On April 17 they went only three miles before entering Pokaw, a large village, where they were reunited with Denny Sharp’s group. They eagerly swapped adventures. The Chindits were now just six miles from the edge of Kachin territory and the more hostile world beyond. Sharp’s party pressed on westwards; Fergusson’s men stayed for breakfast and then moved off. 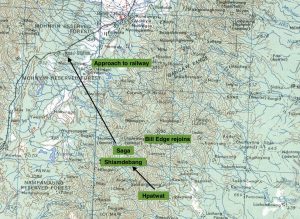 Bernard Fergusson’s dispersal group left Pokaw at mid-morning, with guides leading them to the Meza River, in this area a rocky torrent in a deep gorge. This was the divide between Kachin and Shan-Kadu territory. As they headed towards the Meza ford, their guides warned them of Shan-Kadu collaboration with the Japanese. Many of the villages were garrisoned.

They advised a safer plan, a detour that would mean a high climb. By now, however, Fergusson feared a general collapse in health. They were running out of malaria suppressants, being on three a week, rather than one a day. “It was imperative, therefore, that we should travel by the quickest practicable route.”

Their Kachin guides then implored them to keep out of sight of the Shan-Kadus and give the big Japanese garrisons at Mansi and Nanantuna a wide berth. When they reached the Meza, there was no sign of Denny Sharp’s party. They gave the guides a couple of grenades, to catch fish. This was followed by a farewell meal and bath-time – the first real wash for most for 10 days. Then came the river crossing and the climb out of their Kachin sanctuary.