Major Fergusson’s No.5 Column had struggled to cross the Chindwin – it was much wider than any previous river crossed. Once a light line was across and secured, a heavy line was pulled across, but it was impossible to eliminate the sag in the heavy rope, which fouled the bottom. The Column Commander wrote: “That began a weary cycle of twitching it, diving for it, dredging for it and then starting again.” 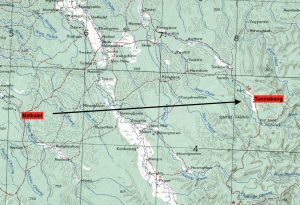 Once across, Fergusson’s men and their animals continued to march by night, resting up in dense jungle during the daylight hours. Some of the men had trouble with “night blindness”. The Column Commander was wary. “I never bivouacked within 500 yards of a track.” They met up with other Columns at the village of Myena. The big air drop was successful and the men of No.5 Column stowed six days’ rations in their packs. They marched through teak forest towards the next objective, the village of Metkalet. Mike Calvert, No.3 Column’s Commander, had reported a Japanese force of 200 at this location. No.5 Column had a chance to join this action. Fergusson wrote: “Besides the chance of complete surprise, we had all of us realised that the one thing needful to complete our training was a successful early brush.”

However, bad country got in the way of Fergusson’s plans. The maps promised a free run to Metkalet but No.5 Column found its way blocked: “…we came suddenly to a long narrow marsh of oozy black mud, covered with surface water…”. The only option was to build a causeway. In the next 24 hours they built 14 more causeways and were still struggling. Fergusson then received a Brigade signal: “Suspect you are on wildgoose chase, stop on to Tonmakeng.” Frustratingly, Fergusson found Metkalet abandoned by the Japanese. They made for Tonmakeng, a village close to the selected Brigade bivouac. Wingate had requested another big supply drop and Fergusson got the job of receiving it. The supplies included free-dropped corn for the mules. During this operation, a No.5 Column sentry was found asleep. Major Fergusson gave him the choice of walking back to India or taking a flogging. Not surprisingly, he accepted the latter. CSM Cairns administered the punishment with a makeshift cat-o-nine-tails fashioned from parachute cord. The Column Commander reflected on the sleeping sentry: “…he had all our lives in his hands, and put them in pawn.”

Commenting further on this incident, Fergusson wrote: “How do you punish a man for an offence like that, in circumstances like these? Shooting, thank goodness, is no longer the recognised punishment; to hold a field general court martial and give him penal servitude hardly helps towards making him a useful soldier during the next few months; detention, loss of pay, stoppage of leave, confinement to – Column? – none of these seem applicable.”

There was tension among the men. The jungle was rich in hazards, from falling trees and rotten branches to an impressive array of stinging and biting creatures, from ants and flies to caterpillars, ticks, scorpions and leeches. They loathed the ferocious red ants populating dry teak jungle. Fergusson said they had “the most vicious sting imaginable. They would stand on their heads and burrow into you as if with a pneumatic drill.” The Chindits learnt to remove leeches with salt or a burning cigarette. One particular worry was the possibility of an intrepid leech finding its way into the most private of private parts.