Major Bernard Fergusson’s dispersal party had been warned, on leaving the Meza River, that there was only one stream in the next 10 miles of their march towards the Chindwin. They stopped as night fell on April 17, just short of the pass through hills that would lead them down to the valley and more dangerous territory. 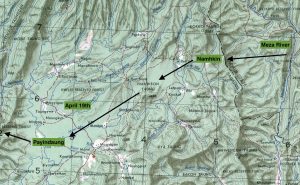 The next morning, April 18, saw Fergusson’s group reach the west side of the pass, where the jungle was teak and less dense. They skirted the first village, Nanhkin, put off by a notice in Burmese warning “Nobody allowed in Nanhkin without a pass”. They stopped beside a small chaung for breakfast. Fergusson maintained discipline: some men were lax and used wet wood for their fires. They were punished by the denial of breakfast. On leaving, the going was unpleasant – they pushed through bizat bushes and the undergrowth released irritant particles that percolated down their necks. 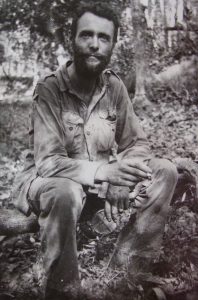 They were crossing open paddy when they ran into a group of locals, who promptly fled. Their presence was no longer a secret. As they entered jungle they found two brothers who said they were willing to guide them. Fergusson realised that Kachin knowledge of the area was out of date and that the Japanese presence in the valley had thinned. Yet Denny Sharp’s party had bumped a Japanese patrol just two miles to the north of them. This group took some casualties but hit a couple of the enemy before they withdrew.

That night Fergusson was tortured by lice, a problem that had intensified in recent days, compounded by the attentions of clouds of mosquitoes. Fergusson wrote: “Between them, they made sleep by night almost impossible, despite one’s weariness; while by day the flies were almost as bad.”

Their guides left them at noon on April 19, south of Hmawbon. They reached the banks of the Chaunggyi just before dark and ran into the headman of a local village, who organised rice and tea for the evaders. His companion, a former employee of the Bombay Burmah Trading Corporation, stayed with them and discussed their route to safety.

Tea was now very short. It had been a life-saver. Bernard Fergusson: “One was always reluctant to drink the last two mouthfuls, well knowing one would get no more for a long while to come.”

His dispersal group now confronted the challenge of the Zibyutaungdan escarpment. There were several routes across and Fergusson received conflicting advice from the locals. Eventually, he decided to take the Payindaung track. Fergusson had no knowledge of it but it seemed preferable to the other options. His mind had rebelled against the Chaunggyi gorge. It would take two days to thread their way through its narrow defile. If spotted, it would be easy for the Japanese to trap them at the western end. Yet, he was persuaded to change his mind in the morning and they were soon inside the gorge. They had to wade for around a quarter of the time.

They left the Chaunggyi during the late afternoon of April 21, at the site of a deserted village. With local assistance they travelled on to the Nam Kadin and upstream to the village of Monawngpawng. This was deserted, due to the proximity of the Japanese, but the Chindits decided to rest. Fergusson was then told of a force of 200 Japanese who would almost certainly have confronted him, had he taken the Payindaung track.

A new guide briefed them on the strength of Japanese garrisons in the region and advised on those tracks popular with the enemy. They held on to the earlier guides until dusk on the 21st, for security reasons. The men slept in bamboo, off the main track from Nawng-puaung to Sinlamaung. 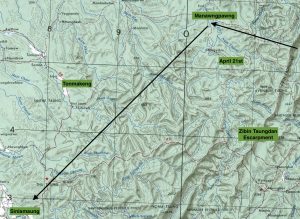 On the 22nd their march was free of incident. They were getting low on rice but still had a couple of days in hand. They reached a small village in the evening and Fergusson addressed a growing worry – the state of their feet: “It was not so much that our boots were falling to pieces, and that many men were now marching in tattered rubber shoes. The two days of splashing through the Chaunggyi had, despite every precaution, brought on many cases of footrot, and it was a matter of time whether the affected feet lasted out. We had nothing to put on them and they were already in the painful state where the sufferer could hardly bear them to be touched. One got them wet not less than six times a day, wading across streams; earlier on one had thought nothing of it, but now every stream was a definite setback.”

Bernard Fergusson had reached the edge of his last map and there remained around 20 miles of country to cross before they reached the Chindwin beyond Myene. Fergusson wrote: “I was intending to cross at the bottom of the Myene Valley, where we remembered having seen boats just after our original crossing.” Every man realised that holding on for the last 20 miles to the big river would determine whether or not they had a future.