Fergusson’s No. 5 Column was now the tail of the Brigade – the worst position to be in. As the first Chindits crossed the Chindwin, Bernard Fergusson assembled his force and read Orde Wingate’s Order of the Day, which concluded with the words: “Finally, knowing the vanity of Man’s effort and the confusion of his purpose, let us pray that God may accept our services and direct our endeavours, so that when we shall have done all, we may see the fruits of our labours and be satisfied.” Then, with five days’ rations in their packs, they set off for the last stage to the Chindwin. They were climbing the last hill before the river and soon “bumped” the tail of the next column ahead.

The No. 5 Column Commander described the appalling state of the track: “The gradients were steep, but that was not all; for the recent rains had loosened much earth and the track was apt to give way and slither down the hillside.” 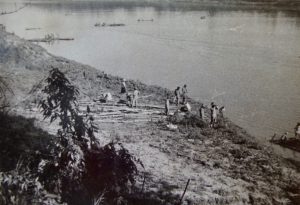 On the morning of February 15, Fergusson and two of his officers went ahead, reached a clearing and saw the river below: “… the Chindwin stretched away north and south, separated from us by about five miles of jungle-covered hill, sloping gently down to the river.” Through glasses, they could see the site for the first supply drop, promised for that night. News came that the Tonhe crossing was going badly. Fergusson, at the end of the queue, decided to cross elsewhere, at a point three miles upstream, then march independently to the drop zone. If things didn’t work out, he would have time to return to Tonhe when, hopefully, the muddle would have been sorted out.

No. 5 Column cut through an overgrown track, reached a deserted village (Hwematte) and surveyed the Chindwin: “The banks were high, the river about four hundred yards wide where I stood but a good deal wider both above and below. It reminded me of the Thames at Cliveden.” 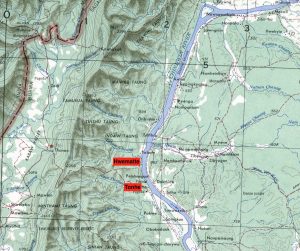 They hired a passing small native boat. Meanwhile, Fergusson took a closer look: “I … tried to see it as a crossing place. The near bank was all right; there was a little track down which mules could be got, and a good beach, and a patch of deep water near the edge into which the mules could be shoved (for they like a gradual immersion no more than I do). But the far side was tricky: although there was a beach, it looked muddy, and was backed by steep banks. I resolved to go across and have a look.”

The Column Commander crossed in the small native boat. He found the far bank less muddy than feared, but the steep banks would be challenging. The best hope was to focus on where a stream entered the river. The banks here were less steep. They would cross that night, 15/16 February.

Animal Transport Officer Bill Smyly stared at the river: “I didn’t really know how to get my mules across. We put canoes out in front, tied some mules together in a line and set out. It is impossible to drive mules across a river. They simply turn around and come back to the near bank. They have to be led across to the other side.” The canoe strategy was Fergusson’s idea.

The Chindwin was formidable. Alex Gibson, a Cypher Officer with Major Michael Calvert’s No. 3 Column: “Confusion reigned in the darkness. There was a very strong current and even the best swimmers had so far failed to get a rope across to the opposite bank. This was essential, as none of our Gurkhas could swim.” During the following day, Gibson, an accomplished swimmer, went out and back three times.

Fergusson had nothing but praise for the water skills of the Karens of The Burma Rifles: “Their prowess in the water has to be seen to be believed. They would build boats from bamboo and ground sheets in a few minutes.” They crossed the Rubicon.