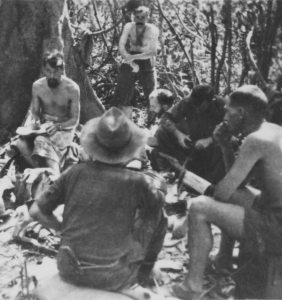 Major Bernard Fergusson’s No. 5 Column was one of five Columns making up the “main body” of 77 Brigade – No. 2 Group (Northern). They set out for the Chindwin on February 8 1943, with orders to attack the north-south railway and facilities near the town of Nankan, in an area known as “Railway Valley”. There were two additional Columns making up No. 1 Group (Southern). They had orders to cut the railway to the south and divert attention from the main body. This Group set out on the same day. They spent long days marching into position, initially along the Manipur Road. They moved by night, leaving the road free for long motor convoys during the day. They often marched in driving rain, when their heavy packs became even heavier.

Fergusson’s Column was to attack the Bonchaung Bridge and Gorge. He worried about the inevitable decisions on the fate of the sick and wounded who could no longer march: “I gave the officers a talk the afternoon before we entrained. The thing that worried us all most was having to leave behind the wounded, but it was quite obvious that there was nothing else to be done for them and that to linger with them meant risking the success of the show.”

Wingate’s force was inspected by General Wavell. The wider offensive that Operation Longcloth was designed to support had been cancelled, but Wingate succeeded in defending his opportunity to demonstrate the potential of the LRP jungle-fighting concept. In Fergusson’s words: “It was on”.