It was now a question of avoiding trouble and getting to the Irrawaddy as quickly as possible. As they marched, No. 5 Column’s Commander worried about the party that had been dispatched to Nankan. He had expected them back by now. He could only hope this group of around 30 would turn up at the rendezvous.

They halted at noon on March 7 – Fergusson wanted the wireless. He reported the destruction of the bridge and the blown gorge. He also learnt that Captain John Fraser was making good progress towards Tigyaing, the river crossing. 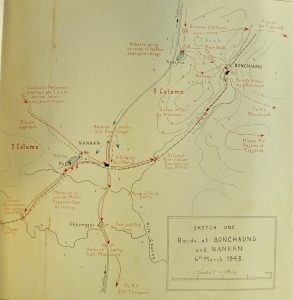 The Column then reached a fordable point on the Meza River, at Peinnegon village. There was smallpox in this village, so the men didn’t linger. They turned south, moving along the east bank of the river. They halted in less than a mile. Fergusson wrote: “… the jungle was exceedingly thick and all of us tired: we had marched 113 miles in seven days and had a considerable emotional strain as well, while our loads weighed an average of 60 lbs.” They stopped for the night at 16.00 and were asleep before dark.

On March 8 a small group was sent on ahead to reach the RV, as it closed at noon and it was possible that the main body wouldn’t get there in time. In fact, the main body stopped before the RV for a meal and, most importantly, a scheduled communication with Brigade. Fergusson received the message that No. 1 (Southern) Group had not been heard from for 10 days, suggesting that crossing the Irrawaddy was hazardous. No. 5 Column was given discretion to cross the Irrawaddy or, instead, base itself in the Gangaw Hills and harass railway repair gangs.

The Southern Group had enjoyed mixed fortunes. No. 1 Column was the first to cut the railway, on March 3 just north of Kyaikthin. However, on the preceding night No. 2 Column fought an action near that village and was dispersed. Fergusson, meanwhile, found the warning message “distinctly unsettling”. He told Brigade he would think on it and respond with a decision in a few hours. As they moved on the Column Commander wrestled with the issues. He had received a favourable report on the prospects for crossing at Tigyaing and the Japanese would be expecting them to start their return to India rather than go further east. On the other hand, crossing the huge river would be tricky and No. 5 Column was still incomplete. There was also the thorny question of how to get back. He did not know that the Northern Group’s No. 4 Column had been ambushed and broken up. This meant that Wingate was left with just four columns under direction, to continue Longcloth.

There was no sign of the missing groups – the Nankan and gorge parties. Bernard Fergusson told John Fraser that he’d wait at the RV for another 24 hours. Fraser said there were no Japanese at Tigyaing. Then the Nankan party reached the RV. They had been short-handed following the action involving Kerr and decided not to go on to Nankan. The No. 5 Column Commander signalled that he would attempt the Irrawaddy crossing: “… I proposed to try it and then to march for the Shweli bridge on the road running from the main Burma Road up to Bhamo. If this could be destroyed … the isolation of Myitkyina would be complete …” He hoped to reach this suspension bridge by around March 20.

Where was the gorge party? Fergusson fretted as he attempted to sleep. He was under tremendous pressure. He hoped for a supply drop on March 12 at Pegon village – 20 miles on the other side of the Irrawaddy: “The food problem was rather acute, for it was now 10 days since we started our last five days’ supply, and we were all heartily sick of the rice bought in the Happy Valley. A mule which had been shot in the action at Kyaik-in showed no signs of recovering, so we killed and ate it. This was only the 8th and we had four days more to go before the supply drop. We should be able to get food in Tigyaing, but our wireless batteries were running low and we had no more petrol left with which to run our charging engine.”

Fergusson had every reason to worry about rations: “The dieticians were horrified at our using it at all, since it was originally designed for parachutists to live on for a maximum period of five days.” Each man could expect a day’s ration, weighing two pounds, consisting of 12 biscuits, 2 oz of cheese, nuts and raisins, some dates, 20 cigarettes, tea, sugar and milk and a packet of salt. There was also supposed to be chocolate but two packets out of three had acid drops instead. Fergusson was especially unlucky: “I only got chocolate twice.”

Hungry and exhausted, they were still prepared to cross the gigantic Irrawaddy and march on east to destroy another target. Calvert’s No. 3 Column was also making for the Irrawaddy, but the Japanese were hot on their heels.