A large group of Fergusson’s men had been left on a sandbank in the treacherous Shweli. This river would also impose a severe test on Major Scott’s 8 Column. The main body of No. 8 reached the river on April 1. Their first attempt at crossing failed when the rope of an endless pulling system was cut, with the resulting loss of their dinghies. The 35 men already across were ambushed, leaving just one survivor. More boats were dropped on April 3; they crossed and headed north towards the Irrawaddy. 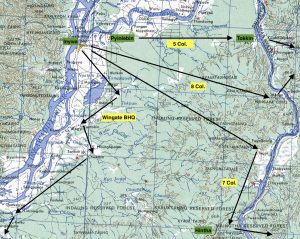 Three days later, on April 6, No. 8 Column fought an action against Japanese manning a strongpoint. The enemy were reinforced by truck but the fresh troops were ravaged by concentrated Bren fire. A Sergeant and Section of seven men vanished during this fight.

Scott took a supply drop at a position 15 miles to the north. The Column Commander then called an officers’ conference and canvassed opinions. The majority favoured continuing north, having had enough of the Irrawaddy and Chinwin. They broke into small dispersal groups, with each group leader free to select his preferred route out.

On April 1 Major Bernard Fergusson, Commander of No. 5 Column, reflected on the fact that they had had only nine days’ rations in the past three weeks, apart from three cupfuls of rice and a share in one bullock and a mule. He found he had to halt the Column more frequently: “If one tried longer spells, the men just toppled over. Even before the Shweli, I had lost two men from collapse, for whom we could do nothing.”

Fergusson added: “… I have to confess that during this period of the march I felt very low. My leg was painful, the splinter of grenade being hard up against the bone, just above the joint of the right hip, where it scraped the bone at every step …”

The Column Commander was also drained by the nightmare of leaving a large group of men behind on the Shweli sandbank. They now headed away, in a south-easterly direction towards potential sanctuary in the Kochaung Hill Tracts, the home of friendly Kachins. They would then have to take a decision. Should they go for the Chinese frontier, around 100 miles away, but having no knowledge of Japanese forces in the region or even whether Chinese territory was still in Chinese hands? Fort Hertz was still in Allied hands but was 400 miles away… and they had no maps. There were also no maps and no news of Japanese dispositions for a third option – go up the eastern side of the Irrawaddy, to roughly the latitude of Myitkyina, then cross the Hukawng Valley. Another option was to cross the Irrawaddy between Bhamo and Katha, enter the Kachin Hills, cross the railway and exit by the Uyu Valley to the Chindwin.

They thought they had shaken off the enemy and it was unpleasant to discover that there were Japanese resident in Kundaw village, where they had hoped to buy food. They moved away, having decided to enter no village until reaching Kachin territory. They had another 25 miles to go and they had nothing to eat. On the morning of April 3 they saw signs of a Kachin village ahead, entered and received a warm welcome. They were then warned that the Japanese had visited the day before and had ordered a meal for today. Happily, the villagers of Zibyugin were prepared to sell the food to Fergusson’s men. They each received about two cupfuls of rice and a golf ball-sized piece of pork. The villagers added that the Japanese had come from villages to the east…exactly where they were headed. 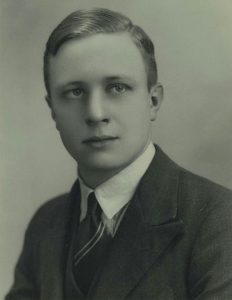 The food was enough for two modest meals. Now they needed more information in order to decide which course to follow, whether to go east or north, to China or Fort Hertz, or Myitkyina or Bhamo. It was decided to send a patrol back to Zibyugin, for more information. It was led by Lieutenant Duncan Menzies, MC. They left the main party. After an hour, shots were heard. About three hours later, two members of the patrol arrived back; they had been walking in circles, trying to find the bivouac. The Japanese had been in the village and fire was exchanged. Menzies and another held the enemy off as the others escaped. Fergusson was very close to Menzies and he spent a miserable night, waiting until dawn before moving off.

Fergusson soon discovered the truth. The Burma Rifles headquarters – around 100 strong – attacked Zibyugin the next day, April 4. Duncan Menzies and his companion were found tied to trees, dressed in Japanese clothes and with their beards shaved. 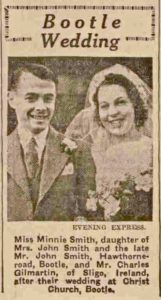 Fergusson wrote: “Gilmartin was dead and Duncan was dying. Both had been shot when the Burrif attack came in. Duncan was still conscious and told Colonel Wheeler and Peter Buchanan about the movements of No. 5 Column, and described how the bulk of the Japanese had left the village, presumably in search of my party.

“He gave Wheeler his watch, to be sent to his parents if Wheeler reached India safely. Wheeler gave him some morphine but he was obviously near the end, and he died before the Burrifs left the village. One minute after Wheeler gave him the morphine, he was himself killed by a stray bullet.”

The No. 5 Column Commander had felt it in his bones that Menzies had been killed. Fergusson wrote: “I had lost many friends already in the war, but Duncan was the first to have fallen so near me, and the only one to have gone to his death at my insistence.”

Wingate’s men suffered terrible hardships on the return. Sergeant Major Bob Hobbs had volunteered for Longcloth. During the long march in he bought rice in the villages: “It took about a month to get used to jungle living, but we were quick to learn. For one thing, we found it best to under-cook rice. When you under-cook rice it swells up in your stomach and keeps you going for 24 hours or more, slowly releasing energy.”

Hobbs was a remarkable character who took everything in his stride: “We crossed and recrossed the Chindwin and Irrawaddy rivers. We always crossed in the hours of darkness. You’d die trying to cross in daylight.”

When the dispersal order was given, Hobbs was put in charge of a group of 15 men. “I was determined to get them out and I always thought I would, but it took some believing at times. I brought all 15 out alive. We carried an inflatable dinghy to cross the big rivers. Most dispersal groups had at least one good swimmer. Our worst problem at that time was the state of our boots. Mine just fell to bits after the Chindwin crossing. On reaching the west bank I threw the remains away and bound my feet in an old pair of shorts. I marched the rest of the way in rags.”

Hobbs went from 13 stone to seven stone. “All I thought about was getting home. In our starved condition, hundreds of miles behind enemy lines, the strain began to show. Eventually, I got to such a state that I became frightened of my own shadow. It was just lack of food. There were times at that stage when I began to doubt whether we would get out, yet we did! We all had private thoughts that kept us going. I used to dream of going to the chiropodist! This seemed to me to be the height of luxury.”